This tutorial shows how to simply utilize keep-out/safety zones where robots can’t enter and preferred lanes for robots moving in industrial environments and warehouses. All this functionality is being covered by KeepoutFilter costmap filter plugin which will be enabled and used in this document.

It is assumed that ROS 2, Gazebo and TurtleBot3 packages are installed or built locally. Please make sure that Nav2 project is also built locally as it was made in Build and Install.

As was written in Navigation Concepts, any Costmap Filter (including Keepout Filter) are reading the data marked in a filter mask file. Filter mask - is the usual Nav2 2D-map distributed through PGM, PNG or BMP raster file with its metadata containing in a YAML file. The following steps help to understand how to make a new filter mask:

Create a new image with a PGM/PNG/BMP format: copy turtlebot3_world.pgm main map which will be used in a world simulation from a Nav2 repository to a new keepout_mask.pgm file.

Open keepout_mask.pgm in your favourite raster graphics editor (as an example could be taken GIMP editor). The lightness of each pixel on the mask means an encoded information for the specific costmap filter you are going to use. Color lightness of each pixel belongs to the [0..255] range (or [0..100] in percent scale), where 0 means black color and 255 - white. Another term “darkness” will be understood as the exact opposite of lightness. In other words color_darkness = 100% - color_lightness.

In the GIMP lightness is expressed through color components value (e.g. R in percent scale) and might be set by moving L slider in color changing tool: 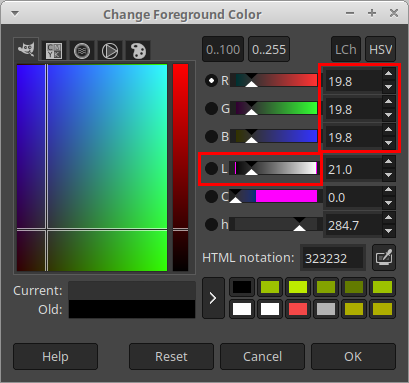 The incoming mask file is being read by the Map Server and converted into OccupancyGrid values from [0..100] range (where 0 means free cell, 100 - occupied, anything in between - less or more occupied cells on map) or be equal to -1 for unknown value. In Nav2 stack each map has mode attribute which could be trinary, scale or raw. Depending on mode selected, the color lightness of PGM/PNG/BMP is being converted to OccupancyGrid by one of the following principles:

There is another parameter in a YAML metadata file called negate. By default it is set to false. When it is set to true, blacker pixels will be considered as free, whiter pixels - as occupied. In this case we should count color lightness instead of darkness for trinary and scale modes. negate has no effect on raw mode.

For Keepout Filter OccupancyGrid value is proportional to the passibility of area corresponting to this cell: higher values means more impassable areas. Cells with occupied values covers keep-out zones where robot will never enter or pass through. KeepoutFilter can also act as a “weighted areas layer” by setting the OccupancyGrid to something between [1-99] non-occupied values. Robot is allowed to move in these areas, however its presence there would be “undesirable” there (the higher the value, the sooner planners will try to get the robot out of this area).

Keepout Filter also covers preferred lanes case, where robots should moving only on pre-defined lanes and permitted areas e.g. in warehouses. To use this feaure you need to prepare the mask image where the lanes and permitted areas will be marked with free values while all other areas will be occupied. TIP for drawing the mask in a trinary or scale mode: typically, amount of pixels belonging to lanes are much less than pixels covering other areas. In this case initially all lanes data might be drawn with a black pencil over white background and then (just before saving a PGM) “color inversion” tool in a image raster editor might be used.

For simplicity, in the example fill the areas with black color (in trinary mode this means occupied map) that you are going to mark as a keep-out zones: 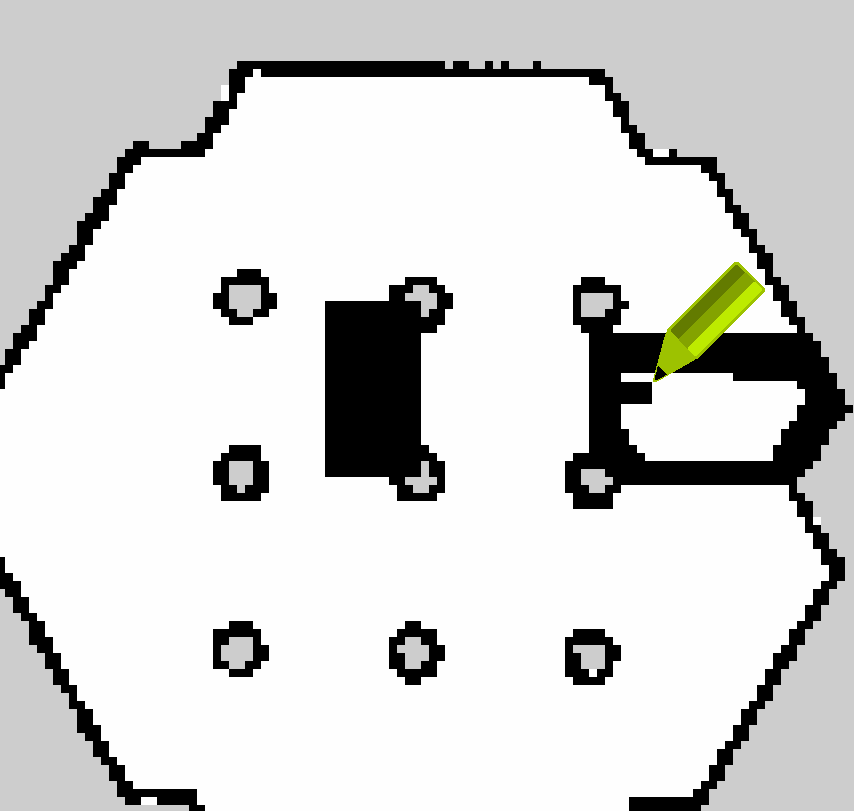 After all keepout areas will be filled save the keepout_mask.pgm image.

Like all other maps, filter mask should have its own YAML metadata file. Copy turtlebot3_world.yaml to keepout_mask.yaml. Open keepout_mask.yaml and correct image field to a newly made PGM mask:

Since filter mask image was created as a copy of main map, other fields of YAML-file do not need to be changed. Save keepout_mask.yaml and new filter mask is ready to use.

World map itself and filter mask could have different sizes, origin and resolution which might be useful e.g. for cases when filter mask is covering smaller areas on maps or when one filter mask is used repeatedly many times (like annotating a keepout zone for same shape rooms in the hotel). For this case, you need to correct resolution and origin fields in YAML as well so that the filter mask is correctly laid on top of the original map.

Another important note is that since Costmap2D does not support orientation, the last third “yaw” component of the origin vector should be equal to zero. For example: origin: [1.25, -5.18, 0.0].

Each costmap filter reads incoming meta-information (such as filter type or data conversion coefficients) in a messages of nav2_msgs/CostmapFilterInfo type. These messages are being published by Costmap Filter Info Publisher Server. The server is running as a lifecycle node. According to the design document, nav2_msgs/CostmapFilterInfo messages are going in a pair with OccupancyGrid filter mask topic. Therefore, along with Costmap Filter Info Publisher Server there should be enabled a new instance of Map Server configured to publish filter mask.

In order to enable Keepout Filter in your configuration, both servers should be enabled as a lifecycle nodes in Python launch-file. For example, this might look as follows:

where the params_file variable should be set to a YAML-file having ROS parameters for Costmap Filter Info Publisher Server and Map Server nodes. These parameters and their meaning are listed at Map Server / Saver page. Please, refer to it for more information. The example of params_file could be found below:

Ready-to-go standalone Python launch-script, YAML-file with ROS parameters and filter mask example for Keepout Filter could be found in a nav2_costmap_filters_demo directory of navigation2_tutorials repository. To simply run Filter Info Publisher Server and Map Server tuned on Turtlebot3 standard simulation written at Getting Started, build the demo and launch costmap_filter_info.launch.py as follows:

Costmap Filters are Costamp2D plugins. You can enable the KeepoutFilter plugin in Costmap2D by adding keepout_filter to the plugins parameter in nav2_params.yaml. You can place it in the global_costmap for planning with keepouts and local_costmap to make sure the robot won’t attempt to drive through a keepout zone. The KeepoutFilter plugin should have the following parameters defined:

To enable KeepoutFilter with same mask for both global and local costmaps, use the following configuration:

All costmap filters should be enabled through a filters parameter – though it is technically possible to include in the layered costmap itself. This is separated from the layer plugins to prevent interference in the layers, particularly the inflation layer.

After Costmap Filter Info Publisher Server and Map Server were launched and Keepout Filter was enabled for global/local costmaps, run Nav2 stack as written in Getting Started:

And check that filter is working properly as in the pictures below (first picture shows keepout filter enabled for the global costmap, second - differently-sized keepout_mask.pgm filter mask): 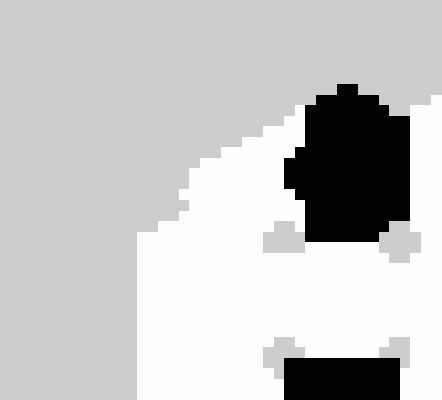