In this guide, we will be looking at the necessary transforms required by Nav2. These transforms allow Nav2 to interpret information coming in from various sources, such as sensors and odometry, by transforming them to the coordinate frames for use. Below is what a full transform tree for a robot looks like but we’ll start with something much more simpler. 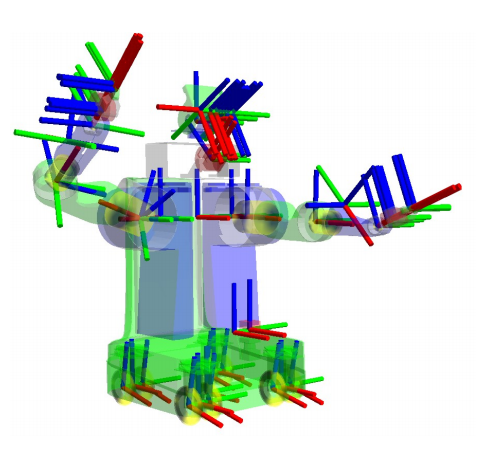 For this tutorial, we will first provide a brief introduction to transforms in ROS. Second, we will be working on a simple command-line demo of a TF2 static publisher to see it in action. Lastly, we will outline the necessary transforms that need to be published for Nav2 to function.

This section of this guide has been adapted from the Setting Up You Robot using tf tutorial in the ROS (1) Navigation documentation.

Many ROS packages require the transform tree of a robot to be published using the TF2 ROS package. A transformation tree defines the relations between different coordinate systems, in terms of translation, rotation, and relative motion. To make this more concrete, let us apply an example of a simple robot that has a mobile base with a single laser sensor mounted on top of it.

Now, suppose we want to take this data and use it to help the mobile base avoid obstacles in the world. To do this successfully, we need a way to transform the laser scan we’ve received from the base_laser frame to the base_link frame. In essence, we need to define a relationship between the base_laser and base_link coordinate frames.

We could choose to manage this relationship ourselves, meaning to store and apply the appropriate translations between the frames when necessary, but this becomes a real pain as the number of coordinate frames increases. Luckily, we don’t have to do this work ourselves. Instead, we’ll define the relationship between base_link and base_laser once using TF2 and let it manage the transformation between the two coordinate frames for us. This is especially useful when working with non-static transformations, such as a set of frames that are moving relative to each other, like a robot base frame in a map frame.

To define and store the relationship between the base_link and base_laser frames using TF2, we need to add them to a transform tree. Conceptually, each node in the transform tree corresponds to a coordinate frame, and each edge corresponds to the transform that needs to be applied to move from the current node to its child. TF2 uses a tree structure to guarantee that there is only a single traversal that links any two coordinate frames together, and assumes that all edges in the tree are directed from parent to child nodes.

To create a transform tree for our simple example, we’ll create two nodes: one for the base_link coordinate frame and one for the base_laser coordinate frame. To create the edge between them, we first need to decide which node will be the parent and which will be the child. Remember — this distinction is important because TF2 assumes that all transforms move from parent to child.

Let’s choose the base_link coordinate frame as the parent because when other pieces/sensors are added to the robot, it will make the most sense for them to relate to the base_laser frame by traversing through the base_link frame. This means that the transform associated with the edge connecting base_link and base_laser should be (x: 0.1m, y: 0.0m, z: 0.2m).

If you are new to ROS 2 or do not have a working environment yet, then please take some time to properly setup your machine using the resources in the official ROS 2 Installation Documentation

Open up your command line and execute the following command:

With this, we are now sucessfully publishing our base_link to base_laser transform in TF2. Let us now check if it is working properly through tf2_echo. Open up a separate command line window and execute the following:

You should be able to observe a repeated output simiar to the one below.

And that’s it for this short demo - we were able to successfully publish a transform from base_link to base_laser using the TF2 library. Note that we do not recommend using the above demo in publishing transforms for your actual robotics projects, it is just a quick demo to see TF2 in action. For a real robot system, we would create a URDF file which embeds this information and more about your robot for use of the robot_state_publisher rather than the static_transform_publisher. There are more suitable and practical ways to go about this which will be discussed in the Setting Up The URDF tutorial.

If you would like to learn more about TF2 and how to create your own transform publishers, head onto the official TF2 Documentation

There are two important ROS REPs which we highly suggest for you to check out. These documents detail some standards set about by the ROS community to ensure proper operation across different packages. Nav2 also adheres to these standards and conventions.

REP 103, on the other hand, discusses some standard units of measure and other related conventions to keep integration issues between different ROS packages to a minimum. The basic overview is that frames are defined using the right hand rule, with Z up and X forward, and units should be standard SI units.

Now let’s move on to some specifics for the Navigation2 package to function correctly. Nav2 requires the following transformations to be published in ROS:

The base_laser coordinate frame is not included in the REP 105 standard. For this guide, we will be using this name to refer to the coordinate frame for a laser sensor on our robot platform. If there are multiple sensor base frames (e.g. camera_link, base_laser2, lidar_link etc.), then a transformation back to base_link for each one is required.

The first transform map => odom is usually provided by a different ROS package dealing with localization and mapping such as AMCL. This transform updates live in use so we don’t set static values for this in our robot’s TF tree. Further detail about how to set this up may be pretty complex, so we highly suggest to have a look at the documentation of the mapping or localization package you are using for your platform. All ROS compliant SLAM and localization packages will provide you with this transformation automatically on launch.

The odom => base_link is usually published by our odometry system using sensors such as wheel encoders. This is typically computed via sensor fusion of odometry sensors (IMU, wheel encoders, VIO, etc) using the robot_localization package.

All other statically defined transforms (e.g. base_link => base_laser, base_link => wheels, wheels => IMU, etc) is what we will be talking about for the rest of this guide. This transformation tree is used by Nav2 to properly relate the information from sensors or other frame of interest to the rest of the robot. The transformation between these two coordinate frames is usually provided to Nav2 through the Robot State Publisher and the Universal Robot Descriptor File (URDF). In cases where there are more sensor coordinate frames on your platform, then a transform tree from base_link to each sensor coordinate frame needs to be published.

For a more in-depth discussion on the usage of transforms and how these are used to estimate the current state of your robot, we highly recommend having a look at the State Estimation topic in Navigation Concepts.

In this tutorial, we have discussed about the concept of transforms and how they are used in Nav2.

In the last section, we have also explored using the static_transform_publisher of TF2 to publish our transforms. You may use this to set up your transforms for Nav2, but this is generally not the best way to do it. In most robotics projects, we make use of the Robot State Publisher since it is much easier to use and scales well as our robot gets more complex. We will be talking about the Robot State Publisher, URDF, and how to set it up in the next tutorial on Setting Up The URDF.

Lastly, we also discussed the three published transform requirements of Nav2 and the neccessary REPs to keep in mind when setting them up.