move_base has been split into multiple components. Rather than a single monolithic state machine, navigation 2 makes use of action servers and ROS 2’s low-latency, reliable communication to separate ideas. A behavior tree is used to orchestrate these tasks. This allows Navigation2 to have highly configurable navigation behavior without programming by rearranging tasks in a behavior tree xml file.

The nav2_bt_navigator replaces move_base at the top level, with an Action interface to complete a navigation task with a tree-based action model. It uses Behavior Trees to make it possible to have more complex state machines and to add in behaviors as additional Action Servers. These behavior trees are configurable XMLs and we provide several starting examples.

The planning, behaviors, and controller servers are also action servers that the BT navigator can call to compute. All 3 servers can host many plugins of many algorithms each and individually called from the navigation behavior tree for specific behaviors. The default plugins provided are ported from ROS 1, namely: DWB, NavFn, and similar behaviors such as spinning and clearing costmaps. A new behavior for waiting a fixed duration was also added. These servers are called from the BT navigator through their action servers to compute a result or complete a task. The state is maintained by the BT navigator behavior tree.

All these changes make it possible to replace any of these nodes at launch/run time with any other algorithm that implements that same interface. See each package README.md for more details. 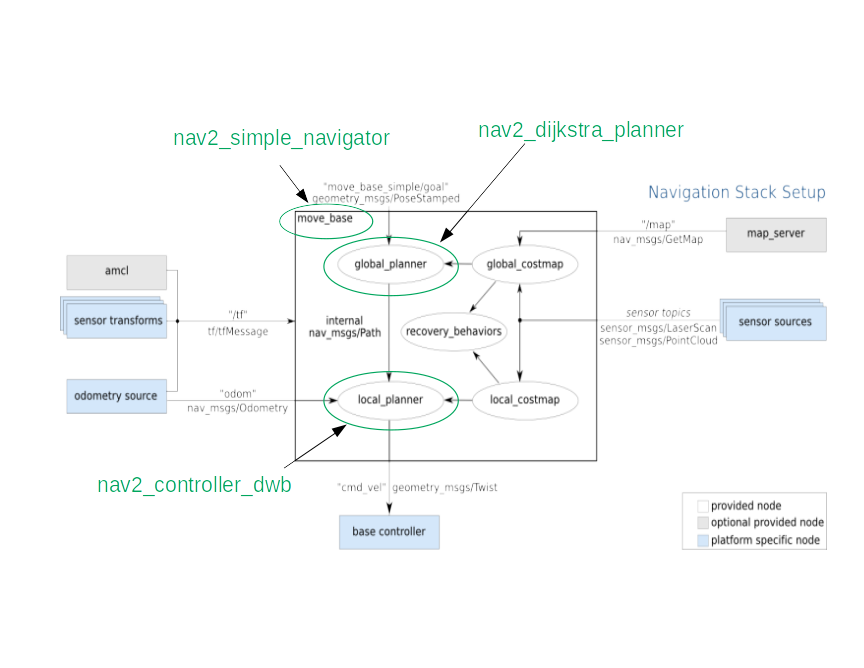 Note: nav2_simple_navigator no longer exists, it has been replaced by nav2_bt_navigator.